A deep space mining vessel receives an unidentified signal. Assuming it to be a distress call they land on a desolate planet only to find they aren’t the first life forms to do so. Hilarity ensues. Just kidding, it really doesn’t.

I have to admit, this isn’t so much of as review as it is an unadulterated fangirling. Alien is my favourite movie of all time, although I have to be the only person in history to have been relieved when John Hurt had an alien explode from his insides as I had been worrying he was about to throw up. 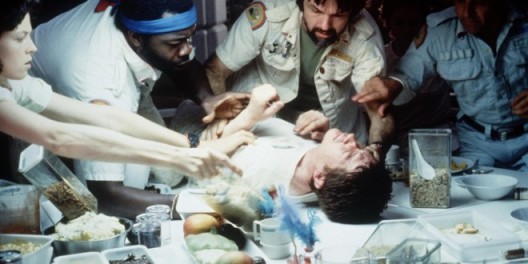 Worst case of indigestion. EVER.

Very few films have truly earned the title ‘genre-defining’ in the way that Alien has. Since 1979 every single sci-fi or horror film has borrowed from it somehow and yet no one has quite managed to replicate the tension or the atmosphere. A few dodgy practical effects aside (the alien definitely looks like a tall bloke in a hat a couple of times) this film is utter perfection and I have to watch it at least once a year. 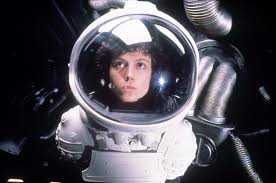 Ripley’s germ phobia was getting the better of her again.

Emetotophobes beware though. There is some associated blood upchucking when the alien emerges from John Hurt but not enough to worry me. What did freak me out however, and what you may wish to skip through, is when Ash (Ian Holm) goes homicidal. The resulting robotic goo-spew was unpleasant and (as ever) pretty unnecessary. Yes, we get it, robots are filled with white shit. We didn’t need it demonstrated in this fashion thank you.

I’d like to finish this sick sense review by warning you never to watch Prometheus or Alien: Covenant. Not because of vomiting, because they’re shit.