The Guardians, on the run after Rocket nicks a few batteries from an uppity gold-painted race of narcissists, are thrown a curveball with the appearance of Quill’s father, who just happens to be a living planet. Because of course he is.

Not quite as universally adored as the first Guardians movie, this outing still proved highly entertaining with a surprising emotional punch. Newcomers to the franchise, Pom Klementieff (Mantis), Elizabeth Debicki (Ayesha) and Kurt Russell (Ego, who else?) more than hold their own against the returning cast but for me the stand out performance comes from the ever-fabulous Michael Rooker as Yondu, Quill’s de facto dad. He also gets the best action sequence – that fin/arrow combo is nifty! 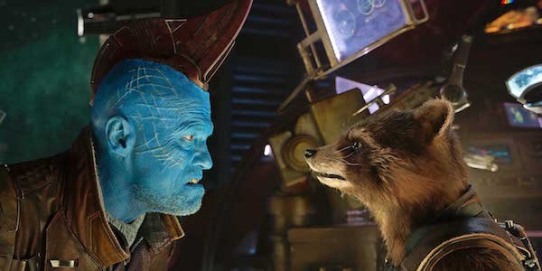 One of the elements not quite hitting the mark was the soundtrack, a big part of the first film’s success, the awesome mix on volume 2 falls a bit flat. With the exception of ELO’s fabulous Mr Blue Sky over the film’s opening sequence, the other songs didn’t really stand out. I’m a big 80s music fan and I think the selection here let the movie down a little.

Much was made in the lead up to the release (and in the merchandising) of Baby Groot (voiced by Vin Diesel). He is cute as a little wooden button, but a tad overused. One of his scenes in particular seems to go on forever. OK guys, we get it, he’s cute with a temper and some sort of mental impairment. Move on. 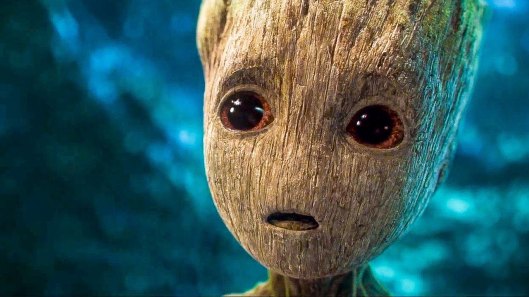 Yes, he’s adorable, we get it.

It also happens to be the aforementioned tree toddler who provides the movie’s main vomit moment. Apparently warping too much makes him airsick. Great. An honourable mention should also go to the long running (and arguably unnecessary/vaguely sexist) Drax joke about how ugly Mantis is. He doesn’t puke but he does gag a lot.

I might sound a bit negative in this review but I really did enjoy the movie, even more so second time around. The casting was impeccable, the emotional element worked well but the first film was so refreshing and fun that the sequel really needed to up the ante a bit more and take a few risks. Kurt Russell turning up in a giant egg just wasn’t enough.